Yesterday, I co-presented a session covering some of the testing tools available in Visual Studio 2010.  Overall, the talk seemed to go very well.  In fact, the majority of the feedback responses were highly positive.  However, there was one negative comment – “This talk really was about Team Foundation Server.  Without this expensive application, the information provided is useless.”

This comment was, no doubt, formulated based on a statement I had made near the start of my talk.  I pointed out that Microsoft Test Manager relied on Team Foundation Server (TFS) and that it could not be utilized without it.  In hindsight, I should have clearly pointed out that the remaining test tools found within the various SKUs of Visual Studio 2010 are not reliant on TFS to be functional.  Also, although it wasn’t directly relevant to the topic at hand, I should have pointed out that TFS is now included with Visual Studio Ultimate/Test Professional (w/MSDN) – thereby possibly addressing the “…expensive application…” portion of the above statement.

To address some of the confusion around the various testing tools available within the various Visual Studio 2010 SKUs, I’ve create the following graphic (note: each of the SKUs listed below are assumed to have a corresponding MSDN subscription): 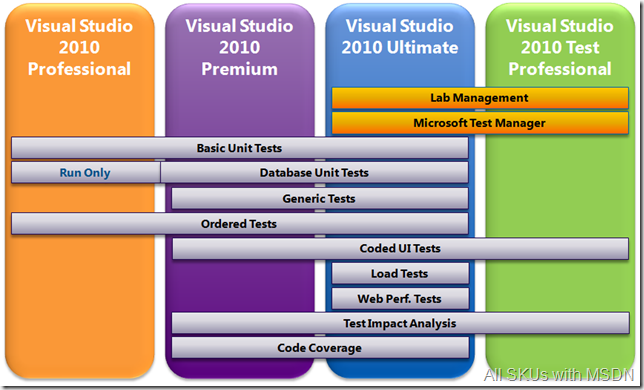 If you’re not familiar with all of these testing features found in Visual Studio 2010, check out the links below for more details.