I’ve been giving a lot of thought lately about whether it would make sense for our application development teams to make the move to Team Foundation Git (TF-Git) as the primary version control choice within TFS. We are still using TFS 2010 as our primary TFS instance today although we have several projects in Team Foundation Service (TFService) as part of a pilot.  As we make preparations to move to TFS 2013 (we have not yet decided if we’ll host TFS 2013 on premises or if we’ll make exclusive use of the TFService) we are putting some thought into whether or not we should make the leap to TF-Git.

There are plenty of pros and cons regardless of which option is chosen.  For example, TF-Git is very well suited for disconnected scenarios and also provides amazing support for branching and merging code.  On the other hand, TFVC provides the common “check out/check in” workflow that so many of us are used to today.  It also provides the ability to place exclusive locks on files that are notoriously difficult to merge such as XML files (e.g. workflow, SSIS packages, etc.).

While it’s easy enough for me to solicit the opinions of my co-workers, I’d also like to get your opinions.  To make this as easy as it can be, I’ve created a simple survey with six questions (see screenshot below).

So, please take a moment and take the survey. 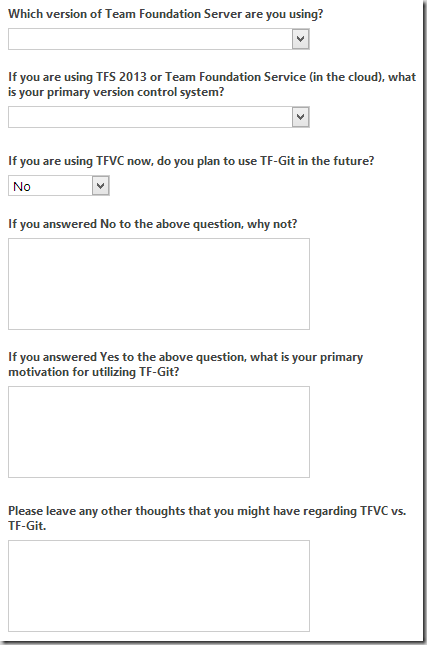 We will keep the survey open for about two weeks.  Once the results have been collected, I will share them on this blog.

One thought on “TFVC vs. TF-Git – A Quick Survey”