I have been developing on a Dell XPS M1530 laptop for nearly 5 years now.  It has been nothing short of a great laptop.  However, as you can guess based on its age, it is a bit dated by today’s standards.  A couple of months ago, I acquired a Microsoft Surface Pro (128BG version) and had been wondering if it might be beefy enough to replace my Dell.

Last week I had the opportunity to try my Surface Pro out in a development scenario so I thought I’d give it a try.  I installed Visual Studio 2012 w/Update 2, ReSharper (the latest version), and StyleCop.  I also included the latest suite of Telerik controls for Windows Phone 8.  I then spent two full days working on a new Windows Phone 8 application (for an internal innovation event at my place of employment).  In short, here is what I discovered:

Based on this experience, I decided it was time to switch to the Surface Pro as my full-time computer/tablet at home.  However, since I had no desire to stare at a 10” screen for hours at a time, I decided to get a USB 3 dock to connect to my other peripherals.  After some initial research, I ended up selecting the Toshiba Dynadock Docking Station (PA3927U1PRP).  This particular model had everything I was looking for: good reviews from other customers, support for USB 3, dual monitor support, and a headphone jack in the front of the unit.  A co-worker has been using a Targus USB 3 Dock for a couple of months now with good results as well.  I ended up choosing the Dynadock mainly for its form factor.

In the screenshot below, you can see the Surface Pro on the right with the Dynadock between the surface and the two monitors.  I have a wired keyboard and mouse connected to the dock along with speakers and a subwoofer (5.1 surround sound is supported) and the two monitors (one is connected via HDMI and the other DVI). 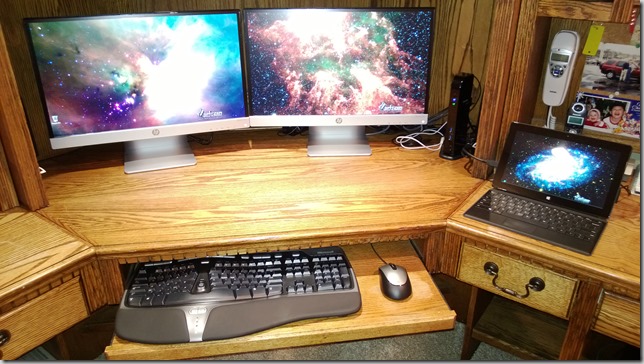 So far I have been very happy with this setup.  At one point, I had a Netflix movie playing on the left monitor and a Hulu show playing on the right monitor with no distinguishable degradation in video performance (the sound from each show was mixed as well without any noticeable “garbling”).

One other item of note… When using Windows 8 (Surface Pro or any other laptop/workstation) I highly recommend getting a copy of Stardock’s ModernMix.  This application is a must have when using multiple monitors and it’s only $4.99 (USD) so it’s very affordable.  ModernMix allows you to run Windows 8 Store apps in a “windowed” environment giving you the ability to move Windows 8 Store apps from screen to screen.  Without ModernMix, your Windows 8 Store apps are pretty much isolated to running on a single screen – and only if you’re not currently interacting with the Desktop.

It is still too early to determine if this setup will end up being ideal but, so far, I am enjoying having better performance than I was having with my previous laptop and now I’m ultra portable in that I only need to unplug the USB connector from the Surface Pro (and power plug, if it’s plugged in) and I’m ready to go.

If it doesn’t slip my mind, I will report back in about six months or so with an update on how, or if, this configuration worked out.

2 thoughts on “Surface Pro as My Main Computer/Tablet”