Due to the recent birth of our new son, Zachary, I am somewhat late in getting this post on-line.  Although I am a little behind in getting this posted, I still want to get the word out about our last presentation at the Omaha Team System User Group. 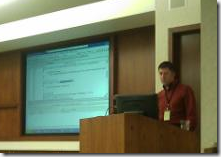 On March 24th, Farm Credit Services of America (FCSA) once again hosted the user group meeting.  Many thanks go out to Russ Wagner for his continued help and for accepting the position as co-leader of the Omaha Team System User Group!

This meeting’s topic was presented by Jeremy Novak, a developer at Farm Credit Services of America.  Jeremy presented on a new open source product called Remote Test Runner – or, RTR. RTR was originally developed at FCSA for internal use to aid in the automation of customer acceptance testing (sometimes referred to as service-level testing).  RTR was published to Microsoft’s CodePlex site following the presentation.

Remote Test Runner is a unit test assistance tool that allows the user to exercise Visual Studio-based test classes outside of Visual Studio. RTR reports on Data-Driven tests at the data field level as opposed to the unit test method level. Failed asserts no longer abort a test.

For more details about RTR, check out this previous post or the RTR project site on CodePlex (link below).