While off for the Christmas holiday, I decided it was time to clean up my home office.  While it’s quite easy to get rid of some junk (e.g. dozens, if not hundreds, of MSDN CDs/DVDs from 8 years ago) some items from my personal gadget history are harder to part with.  Let’s take smartphones, for example.  For those of us who have used and relied on smartphones for years now you know all too well how attached you might become to a specific device.  It kind of makes sense, I suppose, since you use the device multiple times a day – every day.  How many other gadgets do you own that get that kind of use?

So, just for fun, I thought I’d throw out a quick listing of my personal smartphone choices that I’ve made over the years.  I have not owned very many smartphones nor is the variety all that wide but it’s still kind of fun to look back at the various devices. 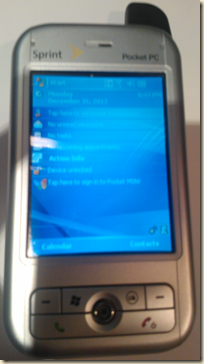 Back in the fall of 2006, I won this phone from a United Way raffle drawing at my office.  At the time, I owned a pay-as-you-go feature phone with service provided by TracFone.  I loved the phone so much that I went to Sprint (the very next day if I recall correctly) to setup a service and data plan (my first data plan ever :-).  As a software developer familiar with Microsoft Visual Studio and the .NET Framework, I was also excited that I could easily create software for my new smartphone.  Although I tinkered around for a while it wasn’t until the following year that I created the first Windows Mobile app that I would eventually publish – SafetyTip (note: I have since ported this app to Windows Phone as well).

On the right is a screenshot of the emulator running SafetyTip. This phone still works today although I am no longer a Sprint customer (switched to AT&T with Windows Phone).  I really have no use for this phone (I can’t even connect it to my home wireless connection because the OS does not support the latest encryption standards) but I just can’t seem to get rid of it. 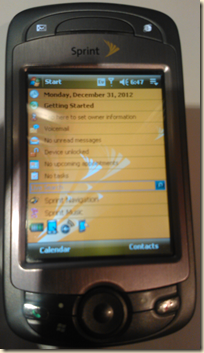 After a couple of years (2008) of use with the 6700 the battery was getting to the point where it could no longer hold a full day’s charge.  After having no luck in finding a good battery replacement, I decided it was time to upgrade to the 6700’s successor – the HTC Mogul (PPC 6800).  For the most part, the 6800 was the same phone as the 6700 other than it was a little lighter and thinner.  However, it ran the latest version of the Windows Mobile OS – Windows Mobile 6 Professional!  The newer OS also opened up more features that could be taken advantage of by developers.

As a side note, this is the only smartphone that I’ve ever paid “real” money for.  My previous phone (the 6700) was from a raffle contest (although I suppose I did pay a few dollars for the raffle tickets) and most of my subsequent phones were won via contests or provided to Microsoft conference attendees. 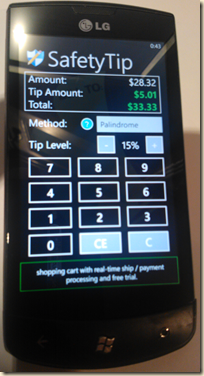 A couple of years later I was attending the Microsoft Professional Developer’s Conference (PDC) in Redmond, WA.  There was a lot of talk and hype around Microsoft’s latest mobile phone platform – Windows Phone 7.  As luck would have it, they provided each (paid) PDC attendee with a Windows Phone – the LG Optimus 7.  Just as I was with my very first smartphone (the 6700) I was excited about the possibilities of writing apps for my new phone – not to mention the idea of replacing my geriatric HTC Mogul with something that could actually compete with modern phones (i.e. the iPhone).  Also, as with my first smartphone, I visited the AT&T store as soon as I returned home from the conference to setup a new data plan (I didn’t require a contract since I already had the phone).

I loved the new Windows Phone OS from the moment I started using it.  Granted, it took a little time to learn where certain features were located and how they worked (or if they even existed at all) but once I became familiar with the phone I was able to complete common tasks very quickly and easily.  I was also now able to write apps for my new phone using the latest version of Microsoft’s development tools and frameworks.  My first Windows Phone app was simply the conversion of my original Pocket PC app – SafetyTip.  You can see the updated version in the screenshot on the right.

I still have this phone today for occasional use as a development/test device, although not very often. 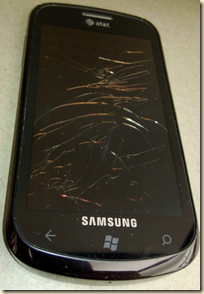 Not too long after Windows Phone 7 was launched, Microsoft was sponsoring an app development contest.  Basically, you had to submit an app to the Windows Phone 7 Marketplace (and it had to be published) then you could enter a contest for a chance to win a Samsung Focus.  I still recall getting the e-mail (on my LG) as I was leaving the theater one night notifying me that I had won one of the phones from that quarter’s drawing.  A week or two later, a brand new Samsung Focus showed up on my doorstep!

I loved the Focus.  This phone was larger and lighter than my LG and the AMOLED screen was awesome!  The Focus was also one of the few (if not the only?) Windows Phones that supported a Micro SD card – which I immediately installed :-)

One day I was backing out of a restaurant parking lot with my wife and kids when my wife said she heard a “crunching” noise.  I didn’t think much of it at the time (there was snow on the ground).  When we got home, I couldn’t find my phone!  I drove back to the restaurant and someone had turned a phone in.  The good news was that the phone turned in was mine.  The bad news was that it had been ran over (by me).  Strangely, the Gorilla Glass screen had not cracked but the AMOLED display underneath the glass had (see screenshot to the left).  I realized later, when I went to remove the Micro SD card from the phone, that whomever turned it in had already taken it! 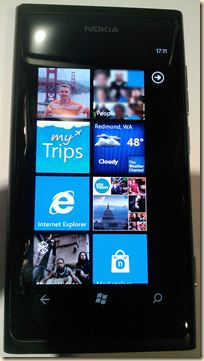 Once again, another app writing contest came up (again, I don’t recall the details) and once again I was able to score a free phone!  This time it was the Nokia Lumia 800.

I immediately switched from my LG Optimus 7 to the Nokia Lumia 800 and loved everything about it.  I especially loved how Nokia was committed to the Windows Phone ecosystem (e.g. providing exclusive apps, specialized hardware, etc.).  I could tell almost immediately that I was going to become a long-term Nokia customer and fan.

Although the Lumia 800 has the same size screen as the LG Optimus 7, it felt just a little bit lighter and just felt better to the touch.  It was nice to hold, look at, and use.

I still have this phone today and continue to use it as a development/test device.  My kids also use it for the occasional game session :-) 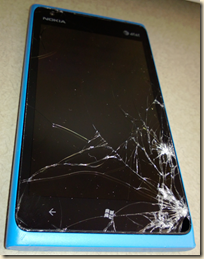 When the Nokia Lumia 900 was announced, I couldn’t wait!  I was really hoping for yet another contest (I had grown accustomed to free phones :-) but none came before I decided to make the move to the 900.  Fortunately, however, the Nokia Lumia 900 was having some software issues out of the gate and Nokia decided to provide a $100 reimbursement to everyone who had purchased a 900 (within a certain timeframe).  Combined with the $100 rebate that AT&T was offering and the Nokia Lumia 900 was effectively FREE!  In fact, I also received a $100 credit that I could put against any accessories in the AT&T store (in my case, a hands-free Bluetooth device and a car charger).  So, in essence, I was being paid to take the Nokia Lumia 900 home with me :-)

Fast forward a few months while on a 40’ish mile road ride… I have my Lumia 900 mounted on my road bike  running one of my favorite fitness apps – Endomondo.  At one point, I hit a bump in the road and the Lumia 900 is jarred from its cradle and it smashes into the highway.  To my surprise, there were only a few dings on the corner of the phone and was still fully functional.  In a not-so-smart move I decide to put the phone back on the bike and continue with my ride.  About a mile later I hit an even bigger bump in the road and the phone goes flying off the bike again.  This time the screen is decimated (Gorilla Glass isn’t indestructible after all)!  You can see the results in the screenshot above. 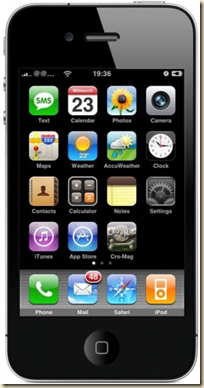 It might seem a little strange that I happen to have also used an iPhone, based on my obvious Windows Phone preference.  However, there is a rational reason for having an iPhone in my arsenal.  As it turns out, the company I work for has relatively standard, and rigorous security requirements for mobile devices that would like to sync with our corporate e-mail and calendar.  Namely, device encryption.  Windows Phone 7.x does not support device encryption.  So, what’s a gadget geek to do?  Well, in my case, I used an iPhone for my corporate e-mail and calendar and relied on my Windows Phone for everything else.

NOTE: The iPhone was provided to me by my company at not cost (which would be returned once I obtained a Windows Phone 8 device).

With the release of Windows Phone 8, full device encryption is now supported (and I no longer rely on my iPhone for corporate e-mail). 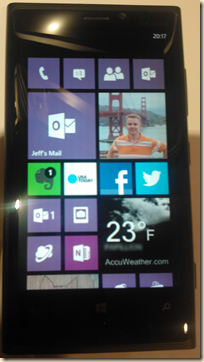 We finally arrive to the device that I am using full time today – my Nokia Lumia 920.  This is the phone that was provided to the attendees of this year’s //Build/ conference.  Upon receiving the phone, I immediately pulled the SIM card from my Lumia 800 and installed it into my shiny, new 920 and it was awesome!

Although there have been lots of reports stating the Lumia 920 is too big and heavy, I have to disagree.  Although the phone is a little on the hefty side, there is not a substantial difference when holding the iPhone 4 in one hand and the Lumia 920 in the other.  Also, I prefer a larger phone screen although I don’t think I’d want anything larger than the Lumia 920 (4.5 inches).

Once I had the Lumia 920 configured the way I liked it, I found myself reconfiguring the start screen over and over again.  It took some time to find just the right mix of small, medium, and large live tiles as well as the optimal placement.  Although I’ve pretty much settled on a configuration for now (see screenshot on left), I have no doubt I’ll tweak it for as long as I own the phone.

So, there you have it… my smartphone history.  Although I am very happy with my Lumia 920, I still look forward to what might be released in the future.  There are still improvements to be made to the Windows Phone OS as well as to the Windows Phone ecosystem.  And, for now, I am happy to come along for the ride! :-)

2 thoughts on “My Smartphone Past”