If you follow the smartwatch industry at all, it’s likely you’ve heard of at least a couple of up and coming offerings.  One is the Pebble smartwatch, one of Kickstarter’s great success stories.  This project had an initial goal of raising $100,000 and ended up raising over $1,000,000!  I backed the Pebble project and was super excited when it showed up a few months ago.
Although I don’t use an iPhone for day-to-day use (I really love my Nokia Lumia 920), I do own one so I was able to link it with the Pebble and play around.  After trying out several watch faces, and a few apps, I really wanted to create some watch faces of my own.  However, Windows Phone is not currently supported (nor do I know if they have any concrete plans to support it).  I do have my iPhone but I don’t own a Mac so I can’t develop software for the iPhone (Xcode doesn’t run on non-Mac platforms).  I don’t own an Android phone and I really don’t feel the need to purchase one just to create apps for the Pebble.
This is where another Kickstarter project comes in – the AGENT smartwatch.  This project also had an initial goal of $100,000 and managed to raise just over $1,000,000 during the funding period.  What I really like about this watch is that it supports Windows Phone (as well as iOS and Android) and that it’s SDK is based on the .NET Micro Framework.  I don’t exactly need another smartwatch, but this one will support my phone (assuming it actually makes it to production) as well as my geeky urges, so, what the hey!? I decided to go ahead and back the project. 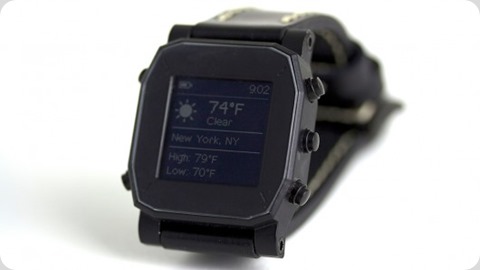 In the meantime, while I’m waiting (months) for my AGENT to show up, I can start experimenting with apps and watch faces now with their AGENT SDK.

Developing watch faces for the Agent watch, which currently run only on an emulator because you can’t get an actual watch yet, is fairly straightforward.  However, before you start, you need to download a few tools.

Once you’ve installed the above tools, you will see a new set of AGENT templates within Visual Studio: 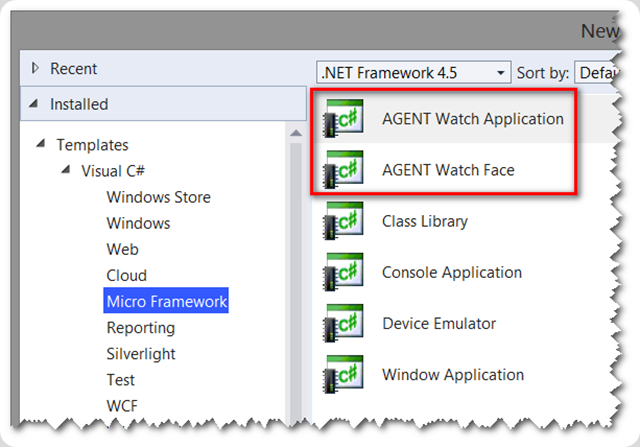 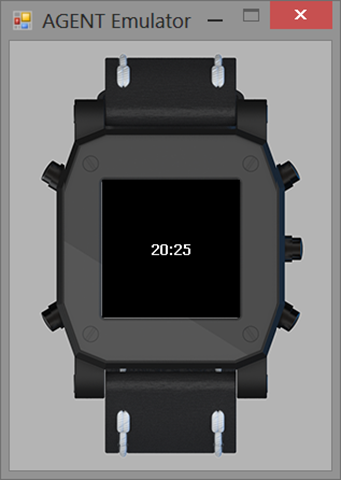 This is a very basic app but it does provide a starting point.
In my case, I wanted to design a watch face that might be used to help younger children learn how to read analog watch and clock dials. Before I started, I sketched out a simple mockup of what I was thinking: 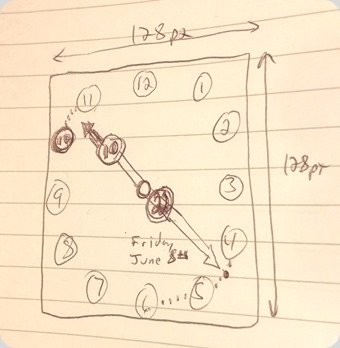 Not very artistic, I know :-)  However, it provided me with a visual and gave me a goal for my first custom watch face for the AGENT smartwatch.
Though I’m not going to go into the code in this post (I’ll save that for subsequent posts) the final result ended up looking something like this: 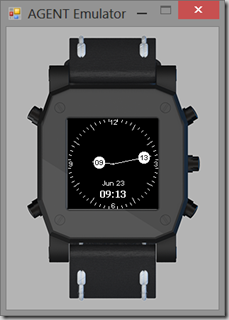 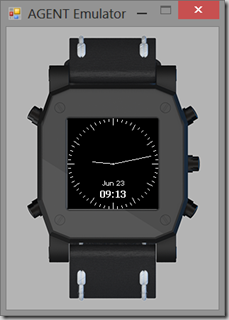 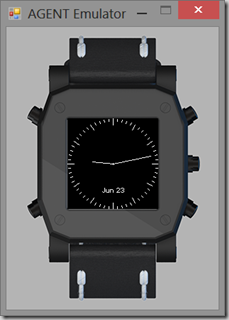 I designed the watch face to have three modes: “Easy”, “Moderate”, and “Advanced”.  You can cycle through the modes by pressing the middle, right button.  The “Easy” mode provides visual indicators on the hands making it very easy to see what they represent.  There are also numbers at the four main positions on the watch face (the final version would like have all 12 numbers) as well as a digital readout of the time at the bottom.
The “Moderate” mode removes the visual indicators from the hands as well as the numbers from the dial leaving only the digital readout for hints.
“Advanced” mode removes all visual indicators leaving only the hands and the date.
This watch face could definitely stand to be polished a little and it likely will be before the AGENT smartwatch is shipped (to backers) later this year.
If you would like to create your own watch faces and/or apps for the AGENT smartwatch, here are a few links to help you get started.  I will be posting more information as well but these are great starting points.

I have no intentions of getting rid of my Pebble – I still hope for Windows Phone support some day – but at least I now have an easy outlet for my desire to build smartwatch apps and watch faces.  All I need now is just a little more… time :-)