Back in October, I presented on Getting Started with the TFS Object Model (as well as a look at what’s coming in Visual Studio 11) at the Tulsa TechFest.  I had intended to post the source code for the demos I ran through during my talk but I never got around to it and it completely slipped my mind.  A few days ago, I was gently reminded by one of the attendees (thanks Sean!) that I had not posted the source code so, here I am!

Below is a screen shot of the main window displayed by the demos.  This application has 10 basic types of functionality that can be demonstrated.  The first two are demonstrated by clicking on the ellipses buttons in the upper right of the window which will display a dialog allowing you to select a TFS Server/TPC and Team Project.

The remaining eight features are demonstrated by clicking on the remaining buttons, which include: 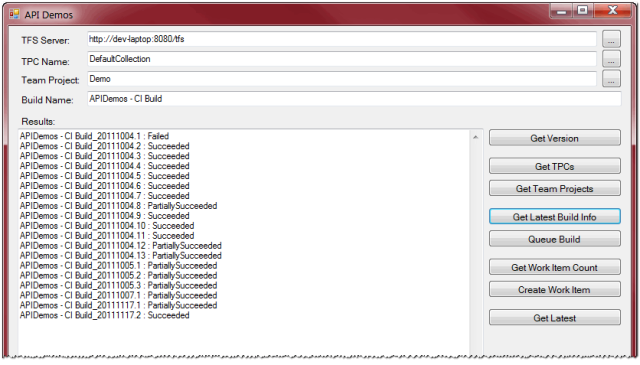 If you’re curious about the source code, you can download it from here.