Anyone using computers for any amount of time knows that backups are a must.  We’ve all heard or read that it’s not if your hard drive fails but rather when your hard drive fails you’ll wish you had backed up your files.  However, history has taught me that it’s not always a failed hard drive that makes me run to my backups but the more likely catalyst is my own actions.  For example, have you ever re-imaged a computer, thinking you’ve backed up everything you considered important, only to realize five minutes after installing the operating system that you forgot to include something really important in the backup set?  I have! :-)

So, with the new year starting, now is a great time to think about a backup strategy.  Even if you have a backup strategy, it’s still a good idea to review your backup process to ensure everything that needs backing up is actually getting backed up.

If you have ever researched backup strategies it’s no doubt that you have heard of the “backup rule of three” also known as the “backup 3-2-1” rule.  I have no idea how long this rule has been around as I can’t seem to locate the origin.  It essentially states the following when creating data backups:

3. Keep three copies of everything you intend on backing up.
2. Maintain your backups in at least two different formats (e.g. hard drive and memory stick, cloud storage and DVD, etc.).
1. Ensure at least one copy is kept off-site (e.g. in case of a disaster such as a flood or fire).

Based on these rules I have made use of the following technologies to satisfy my backup needs:

The following diagram provides a general overview of how the above technologies are tied together: 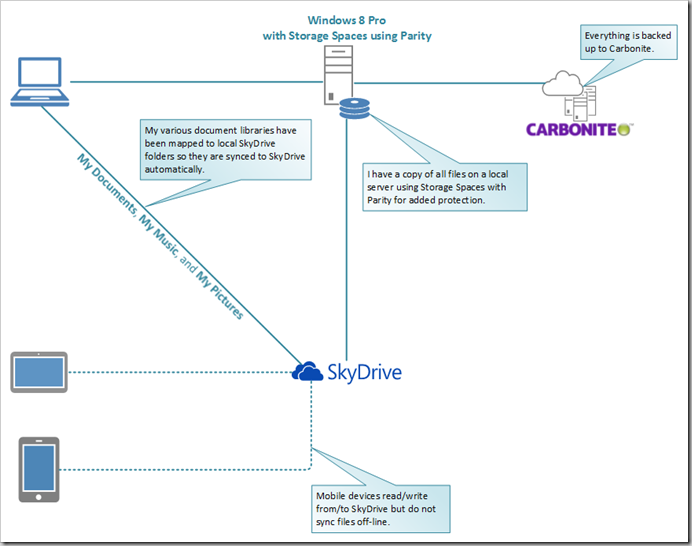 3. Keep three copies of everything you intend on backing up.  Yes.  I have copies on my local file server, in SkyDrive (with the exception of videos), and within Carbonite.  I suppose I’m skimping a little bit here with videos but I am also banking on Carbonite to take reasonable steps to ensure they don’t lose my backups on their end.
2. Maintain your backups in at least two different formats (e.g. hard drive and memory stick, cloud storage and DVD, etc.).  Yes.  I have backups on local hard drives as well as two separate cloud services.
1. Ensure at least one copy is kept off-site (e.g. in case of a disaster such as a flood or fire).  Yes.  I am utilizing two separate cloud services.

So far this backup approach is working for me.  Although I believe it is a good approach it is by no means the only approach or even necessarily the best approach.  As with most processes out there, use what works for you and throw the rest out :-)  If nothing else, hopefully this post will at least get you thinking about backups and implementing a solution before you actually need it.

What backup strategy are you using?  If you have some great ideas, please let us know in the comments below.

3 thoughts on “A Backup Strategy”